Church-hopping Won’t Help When the State Controls the Church! 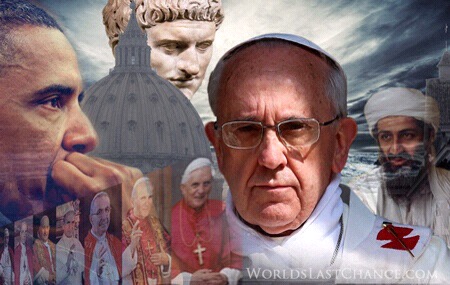 Although we are not privy to exactly when the Lord Jesus Christ will return to earth, scripture DOES  provide a rather complete picture of the state of both religious and political affairs of the season,  with many metaphorical and physical  signs and conditions. Although we may disagree with the order of endtime signs, the symbolic understanding of both Jezebel and the Harlot of the book of Revelation universally represent the institutional church. The IC is “that woman Jezebel who calls herself a prophetess.  She teaches and seduces the servants of God—the elect—to commit fornication with strange  gods.” (Rev 2:20)

SO Jezebel is the apostate church. So is the harlot.

When we read that the harlot, or whore who rides on the back of the Beast, the interpretation is that the IC will seek to gain power offered by the political system.  The beast is the Antichrist. FOr decades in  our times, church leaders have sought and gained favor with local politicians by allowing candidates into their pulpits to promote themselves. In fact, pastors have successfully balanced  on a legal tightrope, trying not to openly break the law by  publicly endorsing any “favorites.”

The 1954 Johnson amendment legislates that any tax-exempt group can lose its exemption if it is found to have endorsed or actively opposed a candidate for political office. Actually, for decades now, the IC’s receipt of tax exempt status is in itself  the blurring of the lines of separation between church and state.  Yet just a bit less than 4 months into his presidency, Trump signed an executive order that  allows church leaders to openly endorse any politician of their choice, from the pulpit, now fully unhindered from riding the back of the beast.

This is just the beginning.

Expectancy, watchfulness and preparedness must be our way of life in this the 11 th hour.  If you have been paying attention to the news, there is evidence that the newly elected  administration in the U.S  quietly has enhanced the already blurred lines of religious and political separation,  particularly among white charismatic Christians and those who are bigots and racists.  What these bible thumpers have overlooked by their prideful, ambitious patronage is the biblical warning that in the tribulation, the  governments of this world shall turn on the institution called “church”  and suddenly destroy Her.

Nevertheless, the Lord comforted us 2000 years ago, by saying “Fear not!”

The time will come, when the Beast is in full power, that the institutional church will be taken over by the state and ultimately destroyed.

Where will YOU be at that time?

It won’t help.  You don’t want to have your name and address on any church roles in Endtimes.

Best to come out NOW!  RESCUE is here to help you plan your transition, make your escape on the down low, without a lot of drama.  Either call us at 888-818-1117 or send an email to getreadyforthelord@gmail.com