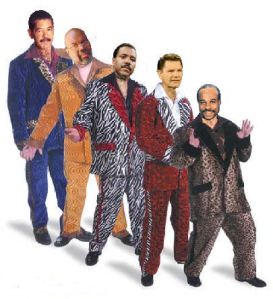 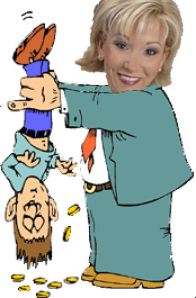 The prosperity gospel is one of the leading false doctrines of the charismatic movement.  Quite frankly, this false doctrine is so distasteful to me that I have buried it along with my attachment to the organized church. However, since I am often questioned about the subject, I will reluctantly address it for the sake of inquiring and damaged sheep. I was sitting in one of Kenneth Copeland’s East Coast Conventions in 1983 as I watched him pull scripture out of their  natural context as he  lay the foundation for this damnable message, passed on to his disciples like  Creflo Dollar and countless other mega and unknown preachers. In fact, I was a partner to KCM for years, until he sent out a letter requesting that I help him buy oil wells! Once a follower and supporter of the charismatic movement, it was the prosperity gospel that drove me out of it.  It was just too sleezy for me to stomach and remain a follower of the Lord Jesus Christ!

Since the love of money is the root of ALL evil, it is not surprising that the prosperity gospel is one of the top false doctrines proclaimed by religious demons in this particular hour of history. In a nut shell, it is an out of biblical context teaching that obligates God to bless the tither or the giver of offerings to the organized church in ALL ways, with an exaggerated focus on financial prosperity.

An added emphasis is that it is taught from the pulpits around the globe  that  a believer can actually BUY a spiritual blessing from God with their financial giving. The message has even been reduced to a quasi-mathematical formula–whatever you give will have a 100 fold return: 100 dollars for a one dollar offering, 1000 dollars for 10 dollars, 10,000 for 100 dollars, and so on.

It is truly an abomination to twist the Lord’s very words in bible RED serve as the foundation for this demonic, materialistic teaching. Jesus said  “I came that they might have life and have it more abundantly”. He was not talking about finances. The word for life in this verse is “zoe”—-ETERNAL LIFE!!! Yet word of faith are defensive and belligerent in their ignorance. Some have even used the Lord’s very words to name their nefarious churches “Abundant Life,” a bold suggestion of their commitment to the prosperity false doctrine.

Consequently,WHEN THE PREACHERS SEND THE MESSAGE THAT MONEY AND WEALTH WILL FLOW FROM THE PULPITS TO THE PEWS TO THOSE WHO  BLESS “THE ANOINTED MAN OR WOMAN OF GOD AND THAT WHEN THEY TITHE, THEY ARE GIVING TO GOD—Well—-

THIS IS THE BIGGEST FLIM FLAM EVER IN THE HISTORY OF CON GAMES.

To the word of faith prosperity preacher, giving money to the church is “planting seed” is taken from the Lord’s parable about “the Sower.” If you have listened to Christian radio or watched preachers on TV, you have undoubtedly heard the expression, “good ground.” They have told you that their church or ministry is GOOD GROUND.” Therefore, if you sow your seed into it, you will reap a financial harvest.

It is amazing how many countless millions around the world  have fallen for this demonic lie in the last 20 years!

Absolutely incredulous. It reminds me of the old flim flam that was rampant  in the 20’s and 30’s in the inner cities called “bakin money.” Prior to the mark giving the con man his or her  life savings, the con man  put a small amount money into a heated oven and “baked”it. As bread spreads because of the yeast, when the money came out of the oven, it had increased 100 fold.

So by this “demonstration,” the mark was convinced by the trick of the eye. You see,  in the demonstration, the con man had sneakily  added the increase into the oven when the mark was not looking by the sleight of hand. Even though poor folk fell for the con,  at least they were shown some sort of demonstration.Today, pulpit pimps and prostitutes have raised the spiritual ante by teaching  THEIR marks that they must“walk by faith and not by sight!”

“WHAT A SET-UP!!!” If you don’t get the increase they promise God will send you for your tithes and offers, you are  yet tricked again to believe that perhaps YOUR faith is too weak to prosper!!!

Listen, people of God! Jesus explained the parable of the Sower Himself. Good ground is the soul or heart of one who hears the gospel, understands it, believes it and He saves them!!!!

In conclusion, I repeat.  The prosperity gospel is  particularly abominable because it takes the words of the Lord, adds to them and detracts from them.

The prosperity preacher may have flim flammed you and gotten rich off of your hard-earned dollars, but he and she are cursed. Why? As Paul warned the Galatians, anyone who adds to or takes away from the word of God is CURSED!

IF YOU HAVE RECEIVED THIS BLASPHEMY, YOU HAVE PARTAKEN OF THAT VERY CURSE! REPENT AND DISAVOW IT, BELOVED!!!!

One last thing.About 5 years ago, the Lord showed  me that He has sent a spirit of poverty on all the sheep who have been duped by the prosperity gospel, —not as punishment but as a warning—a wake up call. He wants to let you know that the prosperity gospel is not working and therefore, you will use your commonsense and wake up to the fact that it is not of Him.  Be warned. He wants you to flee the prosperity gospel.  He will restore your finances once you “get His message” and repent.

Some who became deceived by this teaching will need religious demons cast from them.  Help is available.  Call 518-477-5759

One response to “The Charismatic Movement Part 3: The Prosperity Gospel”