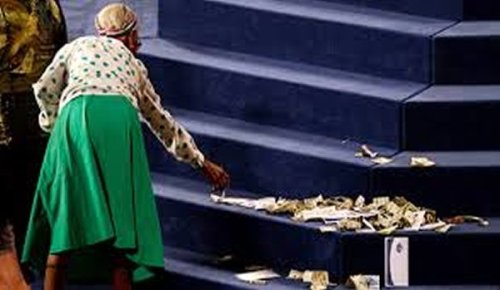 A Sample Reading from The Church of the Endtime Zombies:

The Role of the Prosperity Gospel

Walter Wink’s model of assumptions reminds me of the prosperity gospel that started among American charismatics about 30-40 years ago and has spread throughout almost every denomination and non-denomination around the world. MacArthur adds meat to Wink’s assumptions held by worldly institutions, quite astutely expressed:

The prosperity message unashamedly calls people to place their hope in the passing pleasures of this world. Rather than denouncing wrong desires, it glorifies worldly lifestyles, feeds on sinful greed, and makes poppycock promises to desperate people: “Get right with the Lord and he will give you a well- paid job, a nice house and a new car.”

Actually, the prosperity gospel has armed corrupt ministers to exert rule and control over the masses as they insist that to prosper, all must sow seed to impress God. The seed is money in the form of tithes, offerings, donations and “giving to the pastor.” The “preachers” coerce the zombies to pay their tithes and offerings through a kind of fear-based coercive bargaining, — you plant your seed and God will cause you to reap a 100 fold blessing. If you don’t give, then you rob God and the fires of hell will burn hot for you.

In spite of this obvious scam, the zombies’ belief system allows them to make excuses for this flagrant corruption as leadership continues to pick their pockets.

In “Engaging the Powers,” Wink points out that at any time, the populace can rise up and overthrow the world system by virtue of their numbers but rarely does this happen. The reason for it is deception.

Here is how the deception works. The churchgoing zombie has believed lies to be the truth. Then again, a victim to a lie has too much pride to admit that he was duped. Zombies, though victims of the institutional church’s delusional system of false doctrine and practices that clearly do not work, are nevertheless responsible for allowing the religious system to shape their souls. Besides hearing directly from God as I did, a zombie has the free will to use his or her commonsense and declare, “this mess ain’t workin.”

Ironically,  it is the zombie’s actual  financial ruin that causes us to recognize the elect. For the  Lord showed me several years ago that He shall make His chosen ones lose every material thing that they have acquired while they “sowed a seed” , in order to open their blind eyes to the fact that the prosperity gospel is a lie from the devil. If it were from Him then He would cause  it to work for His chosen ones.  By contrast, the devil is the one who on occasion  allows the damned to prosper, at least for a season.  He needs the prosperity of the hypocrites as a testimony to dupe God’s called and chosen  people to receive false doctrine and practices.

Even though God  makes such a drastic statement to His zombies, He also gave each of us a free will. Our personal volition is the most important weapon to achieve and maintain freedom.

So it is simple. Make a decision.   STOP GOING TO CHURCH.

You don’t have to riot, sue, or maim anybody. You don’t have to stick around the institutional church to try to fix what is broken beyond repair. Understand that you gave your money to the devil and he is not going to give it back to you. Nor will the church or the pastor make good your losses. God will not bless your sowing or your tithing.

One response to “The Prosperity Gospel: Flagrant Corruption, An Abomination!”