Finding The Peace of God in Troubled Times

The Apostle Paul wrote to the Romans, “Let the God of peace fill you with all joy and peace in believing, that you may abound in hope through the power of the Holy Ghost.” (Romans 15:13 )To the Colossians,Paul wrote “Let the peace of God rule in your hearts.” (Col 3:15)  Yet there is such a thing as a false peace. I just watched Oprah’s interview of Joel Osteen, and what manifested clearly is a false peace  by a self-proclaimed blessing. Although he took a stronger stand on the Lord as the only way to the Father than he has in the past,  Osteen hesitated with tongue in cheek as he made it clear that homosexuality is a sin.Yet he equated sodomy on a  par  with “telling a lie or being proud.”

When  Osteen struggled to not offend anyone and   he told  a huge  tv audience that homosexuals shall go to heaven,  he detracted from the word of God.  Paul wrote and warned the Corinthian believers that effeminates shall not inherit the kingdom of God. Does inheriting  the kingdom equate to “going to heaven?” Not completely, but it certainly is a part of the overall package. To be absent from the body is to be present with the LORD “IN HEAVEN” while He remains there. Consequently, Osteen has sent out a platitude  of a” false peace.”Commonsense ought to tell Osteen that  since  God destroyed Sodom primarily because of homosexual activity, it’s a sin far more damning than a lie or pride.. To not be truthful with the gay community is in itself, a lie. Along these same lines, when preachers expound on the escape of a lukewarm, deluded Laodicean age through a pre-tribulation rapture or messages that uphold financial prosperity for all, a  false peace prevails.

Yet when the evil day comes, we will need the peace of God to rule. In this country, we have the expectation that happiness is ours by our American birthright, so we are in constant pursuit of it, particularly on the weekend.  I should spell it “weak end.” Many are speeding in  cars, fighting  in parking lots and pushing forward in various malls and supermarkets, with dentist appointments, diets,  vacations, manicures, gyms, and restaurants on our minds.  The irony is that as a nation in pursuit of happiness, “our weak end” is that we find no peace.

Moreover,  there is coming a day when all of our material comforts shall fail us and the fundamentals of food, water and shelter shall ascend in priority.  I know because I have seen it in the spirit.What usually causes us to lose peace is a lack of understanding that leads to confusion. In other words, what we don’t know brings stress. Therefore, in 2012, I offer a few points that will help you to let the peace of God reign.

In the New Year, many google for prophecies because they have no peace in uneasy times. A wet blanket of worry, fear and stress has fallen on multitudes of professing Christians who search the web for

a prophetic messages. Since they are reading the signs of the times, believers are looking for confirmation and assurances that we will make it beyond December 21, 2o12. In the New Idolatry you will find these words:”Doubt can be a good thing, particularly when those fictitious, religious foundations upon which a captive has built his pride system become shaky.”

Yet in the final analysis, the message that should give you peace is both spiritually historic, prophetic and biblical. Simply put, if you be in Christ, He has already spoken peace to your troubled spirit  when He he prophesied that “if you endure to the end, you shall be saved.” (Matthew 24:13)

This ministry is about preparing the elect of God to “endure to the end,” through publications, deliverance counseling, deliverance mentoring, and deliverance training. Ours is a Christ centered, a spiritual warfare and a spiritual empowerment strategy.  So our help is available to you. Send an email to pamsheppard911@yahoo.com or call 518-477-5759. 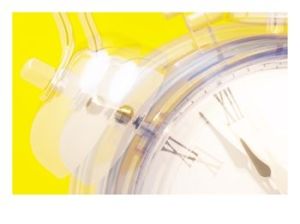 A part of living in the endtimes is to hear and recognize  the “wake-up”call.  God sends out different kinds of alarms.  The alarm that every human being heard in 2011 was an  environmental alarm.  None of us in any part of the world could have slept through the  earthquake alarm that sounded as  a result of the devastation in Japan.  I have my iodine pills to prove it!  We are all thinking, “how can I prepare myself for something like this happening in MY backyard?!”

So we bought  generators, stocked  upon  food, purchased Iodine drops and  water filters.

I believe that making preparations is good commonsense.  However, if we too are struck with a huge tsunami, most stockpiles will be  buried under fallen buildings or washed into the sea by  tidal waves.

Then there are “the spiritual alarms” that come upon individuals.  As a deliverance counselor, what I have seen God do is  release demons of torment upon the deceived, in order to wake them up to the reality that something is most definitely wrong with their “religion.”  This is how it works.  You attend church every time the doors are opened.  You are tithing your gross income, giving additional offerings and donations, and so you are expecting a financial harvest—the 100 fold return blessing that prosperity preachers have assured you that you will receive for your giving.  Yet, you are in the worst financial shape that you have ever been in.  The more you give, the less you have, and that’s a fact.

But you keep waiting and you keep lying to yourself and to others every time you say “I’m blessed.”  Then your car breaks down, your house burns down and you have no insurance.  You let your insurance laps in order to give toward the church’s building fund.  Out of nowhere, you are homeless.  You cry, “why Lord, why?”  His response?

I sent you a wake-up call, a demon of poverty as your “alarm clock.”  Can’t you read the signs?  Have you completely lost ALL commonsense? The prosperity message is one of the doctrines of the devils the Apostle Paul warned you about in My word.  I have allowed you to suffer poverty as “a wake up call.” When you come out of that church, I’ll bless you again!”

There are other wake up calls.  In my book, “the New Idolatry,” I quote the late Watchman Nee:

“Should the child of God desire freedom, his folly must be removed.  In other words, he must know the truth.  He needs to appreciate the real nature of affairs.  Satanic lies

bind, but God’s truth unshackles.Naturally the knowledge of truth is going to be costly, for it will shatter the vainglory one has assumed due to his past experiences.  He looks upon himself as far more advanced than others, as being spiritual and infallible.  How hard hit he will be if he confesses the possibility of his being invaded or if he is shown to have been so invaded!” (The Spiritual Man 1968)

Therefore, if you are a child of God, and you have been ‘invaded,’  what you need to know is that the enemy could not  invade you without your cooperation. And if you have unknowingly been cooperative with the enemy , then God allowed a demon to invade you  “for your good.”  Once you receive the message of the wake up call, you will be set free.